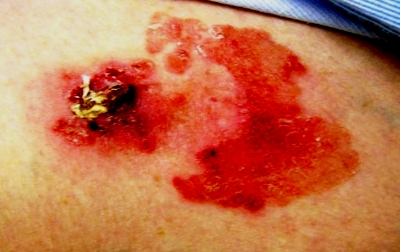 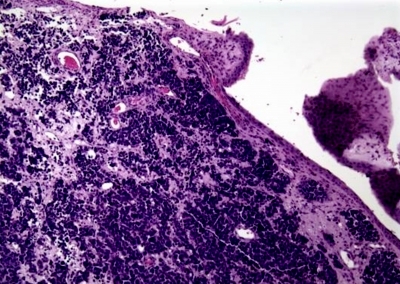 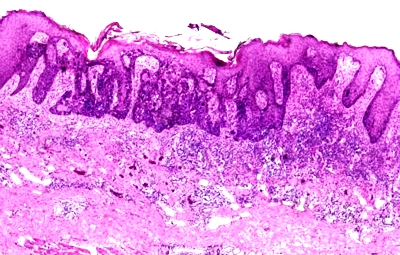 Concurrent Merkel cell carcinoma and Bowen’s disease of the thigh

We report a case of a Merkel cell carcinoma of the dermis with a Bowen’s disease of the overlying epidermis arising in the left thigh in an 88-year-old Caucasian female. A brief review of the literature is presented.

Merkel cell carcinoma (MCC) is a rare cutaneous malignant neuroendocrine tumor usually occurring in the head and neck of the elderly Caucasian patients. The histogenesis of such a tumor has not been fully understood. Morphologically, it resembles a small cell carcinoma of the lung and should always be differentiated from other small round blue cell tumors. Merkel cell carcinoma is an aggressive cutaneous tumor with frequent recurrence and a high incidence of nodal and distant metastasis. Bowen’s disease or in-situ squamous cell carcinoma is a relatively common lesion occurring both in the son-exposed and sun-protected skin. Chronic sun exposure with actinic damage, exposure to arsenic, HPV infection, and internal malignancy has been associated with Bowen’s disease. We present a case of concurrent MCC and Bowen’s disease occurring at a sun-protected location and without any known risk factors.

An 88-year-old Caucasian female presented a left thigh skin lesion (Figure 1), which was clinically suspected to be a pyogenic granuloma. After a diagnosis of Merkel cell carcinoma was made from the biopsy, the entire lesion was completely excised with clear margins. Microscopically (Figures 2 and 3), the dermal lesion was a highly cellular and mitotically active malignant tumor composed of undifferentiated small round blue cells. The tumor exhibited a somewhat trabecular pattern with extensive necrosis. The neoplastic cells were medium in size with scant rims of cytoplasm and hyperchromatic nuclei with a salt and pepper chromatin pattern without discernable nucleoli. Some of nuclei showed nuclear molding with smudgy chromatin. Numerous apoptotic bodies were also noted. Immunostains demonstrated that the tumor cells were positive for cytokeratin 20 with a characteristic paranuclear dot-like pattern (Figure 4). The tumor cells were focally positive for synaptophysin and chromogranin but were negative for cytokeratin 7 and cytokeratin 5/6. Ultrastructurally, the tumor cells showed relatively scant cytoplasm with scattered membrane-bound electron dense core granules in the subplasmalemmal location. The clinical finding, histopathologic features, ultrastructural observation, and immunoprofile were consistent with primary cutaneous MCC rather than a metastatic small cell carcinoma from the lung. 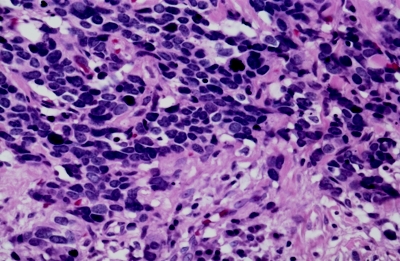 The overlying epidermis revealed a typical Bowen’s disease with dysplastic keratinocytes occupying the entire thickness of the epidermis (Figure 5). On immunostaining, the epidermal neoplastic cells were positive for cytokeratin 7 and 5/6 and negative for cytokeratin 20, synaptophysin, and chromogranin indicating that the Bowen’s disease was a separate and distinct lesion occurring concurrently with the dermal MCC.

The patient remains free of recurrent or metastatic tumor four years after the excision of the lesion.

Both Merkel cell carcinoma (MCC) of the skin (also called primary neuroendocrine carcinoma of the skin) and Bowen’s disease are seen mostly in the sun-exposed skin. The etiologic association of UV light, arsenic exposure and HPV infection has been established for Bowen’s disease, but the cause of MCC remains unknown. Several factors, such as, white skin, older age, sun exposure, and immunosuppression appear to be related to the development of MCC. There are several case reports (1, 2, 3, 4) describing the occurrence of MCC and Bowen’s disease among the people exposed to arsenic. In these cases, the exposure to arsenic appears to be the possible carcinogenic factor leading to the development of MCC and Bowen’s disease. There was no evidence of arsenic exposure in our patient. Interestingly, MCC has both neuroendocrine features, such as, neurofilaments and neuroendocrine granules and epithelial features, such as, cytokeratin in their cytoplasm. It has been speculated (2) that the bidirectional differentiation potential of MCC is reflected in the reports where MCC has been associated with other skin carcinomas, such as, squamous cell carcinoma (5, 6) and eccrine carcinoma (6). The Bowen’s disease of the epidermis in our case does not show any continuity with the MCC in the dermis. Therefore, our observation supports that there are two distinct lesions in the same site in our patient may be merely co-incidental. Clinical recognition of such a case of concomitant MCC and Bowen’s disease, especially occurring in an unexpected sun-protected location may be difficult.