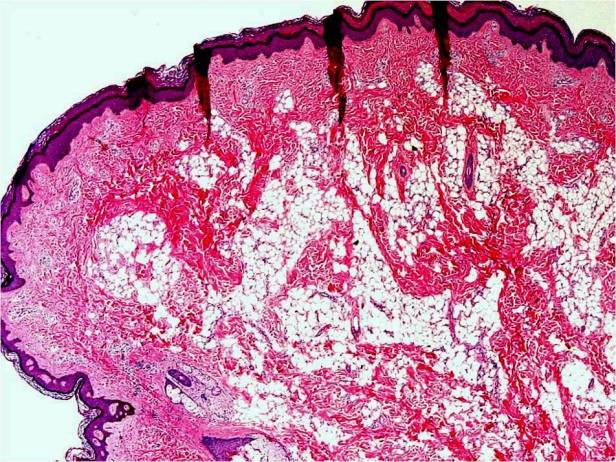 Nevus lipomatosus cutaneous superficialis is a rare benign hamartoma characterized by the presence of mature adipose tissue in the dermis.

Clinically, the lesion may be classical type or solitary type. The classical type lesion consists of clusters of papules and nodules usually in the pelvic or gluteal areas occurring at birth or during childhood.

The solitary form occurs as a single dermal nodule or papule after age 20.

DON’T GET CONFUSED WITH THE TERM NEVUS

Nevus (plural: nevi) is a nonspecific medical term for a visible, circumscribed, chronic lesion of the skin or mucosa. The term originates from naevus, which is Latin for “birthmark”.

Another thing to remember

Normally, there is no adipocytes in the dermis, but fat cells are the predominant cells of the subcutis. That’s why you may see lipoma or angiolipoma in the subcutis, but not in the dermis.